This is the second installment of a 2-part article on eliminating threats to project profitability. The first installment tackled more of the planning and pre-construction phases of a project lifecycle and how to assemble the structure, people and processes on the project that will set the stage for reducing financial risk.

To recap what was discussed in part 1, here is a quick summary of those first 4 methods:

This second installment on this topic highlights four more methods for eliminating threats to project profitability. These methods are more directed towards the execution phases of a project and how the ongoing monitoring, measuring, forecasting, reporting and adjusting that take place in iterative cycles throughout the project are essential to maintaining maximum profitability

On larger projects where financial risk is a more significant threat, it’s critical to continuously monitor and forecast project cash flow. This means forecasting cost, revenue and the intersection of both – i.e. forecasting profit. The process of forecasting starts with measuring current project progress and subsequently entering projections of what it will take to complete the project. This provides insight into potential changes in profitability as incurred costs to date are often either higher or lower than what was initially planned in the project budget.  For example, materials may have cost more than originally budgeted, or you had to use more expensive labor resources than planned due to availability and scheduling.  Progress measurements and forecasts also provide insight into project issues that may have surfaced and need to be addressed. Issues such as cost overruns, productivity declines, errors, omissions, etc. By identifying issues early on, this enables your teams to take quick corrective action before issues have any material financial impact.

To achieve the best results, forecasting also needs to be done in regular, iterative periods and not just at the beginning of the project during the planning phase. By forecasting incrementally like this, your teams will be able to make continuous adjustments to ongoing planning and projections to ensure profitability isn’t compromised.  Throughout a project’s lifecycle, shifts and changes can occur that can have a significant affect on a project’s profitability. It’s key for project controls to measure, forecast and recalibrate in cyclical iterations. Additionally, cash flow forecasts should ideally be reported at a higher level in a multi-project aggregate view to ensure that cash flow can be managed from a more holistic perspective.  In other words, looking at cash flow from multiple projects merged together will deliver more comprehensive visibility into an overall view of corporate-level profitability in real time.  To accomplish this type of forecasting, you’ll need a system that has the capability, logic and algorithms to gather the data and render the forecasts on a timeline curve.

On any major project, there will be dozens if not hundreds of issues that arise due to unexpected circumstances, faulty drawings, mistakes, design changes and on and on.  When things don’t go exactly as planned, a scope change or rework can disrupt the planned flow by way of a change order. Not surprisingly, someone needs to cover the cost of any project change, so it’s clearly imperative to be on top of it and ensure that you’re not the one on the hook, and it doesn’t compromise profitability. Scope changes can naturally introduce a revenue-generating opportunity, while mistakes, faulty work or carelessness will cause extra costs to the contractor that are not reimbursable, throwing a significant dent into the profit realized.

A lot of this can be avoided and spun to the positive as long as the contractor is diligent about following the terms of the contract; while also applying the appropriate amount of project management oversight on the crews doing the work, and carefully tracking everything. The threat of costly rework can be made worse if a dispute surfaces and the relationship sours into a legal claim about who pays.  While the majority of disputes and claims are settled out of court, it can add extra legal costs and delays in getting paid, while leaving the contractor vulnerable to a failed claim.

Project controls is a discipline and project role whose primary function is to control project financial and schedule risk. You can loosely think of them as the project’s accountants (both financial and forensic). If you were to compare the complexity of running a $50 million company versus running a $50 million project, which would you say can live without solid financial governance?  Could you even imagine a $50m company without a finance department?  Having a project controls role on major projects is still today thought of as somewhat optional, even though one could easily argue that the project has far more moving parts, layers and need for daily rigor and oversight to secure a successful outcome than the equivalent company.  This flawed thinking goes back to the same “just get it done” contractor mindset that over-focusses on the work side of a project, leaving the business, financial and legal side of the project largely under-resourced.

The project controls team will take on the responsibility for key project financial elements such as: budgeting, forecasting, progress measurements, cash flow planning, productivity and performance measurements, risk mitigation, reporting and much more. They are instrumental in feeding stakeholders with accurate projections of project success, and applying the corrective actions and rigor needed in an ongoing, iterative basis.

Gathering real-time data on a project provides the project team with the information they need to make quick and knowledgeable decisions.  Tracking the project lays the groundwork for measuring, forecasting and reporting on the project, and can spell the difference between success and failure. As part of the monitoring process, tracking both cost and revenue (in addition to hours, materials, progress, etc.) will attain real-time visibility into profitability and any downward trends that need to be addressed.

In the Construction Dive article, What Contractors need to know about disagreements on public jobs, Kim Slowey states, “When one of its subcontractors has problems, the language in many forms of contracts between the general contractor and subcontractor allows the general contractor to terminate the subcontractor after following certain notice provisions or even for convenience if necessary. If the owner is on board, and the general contractor has done everything it can to resolve the issue, then removing a nonperformer from the project isn't too difficult.” As far as threats to profitability go, there’s no greater threat than getting kicked-off the job!  It pays therefore, to have accurate visibility into performance metrics to lessen that risk.

Monitoring and reporting on cost, revenue, profit and productivity can only really be accomplished if the project team has a collaborative system where all this data resides. The system should provide the built-in tools for the various disciplines to enter and extract the information they need. Disciplines such as project controls, construction management, project management, field staff, finance and senior management. Having all this information together in a unified platform gives everyone the insight and tools they need to truly eliminate threats to project success. 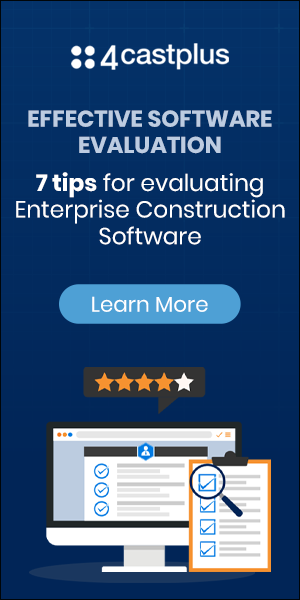